I have always felt that it’s an utmost priority to educate a society. When a country’s citizens are educated they become innovators, inventors, and successful, healthy people. Hopefully, other states in America will follow suit with what these two states are now offering.

Student debt is one of the most persistent financial hurdles that Americans face and for many, the rising cost of college has made attendance impossible. U.S. citizens now hold a whopping $1.31 trillion in student loan debt.

In two of America’s most expensive places however, an affordable college education is becoming a reality. In fact, in California and New York you can now go to college for free. Here’s how:

New York became the first and only state in the country to offer free four-year public college through the Excelsior Scholarship program, which was approved by the New York state legislature on Sunday night. 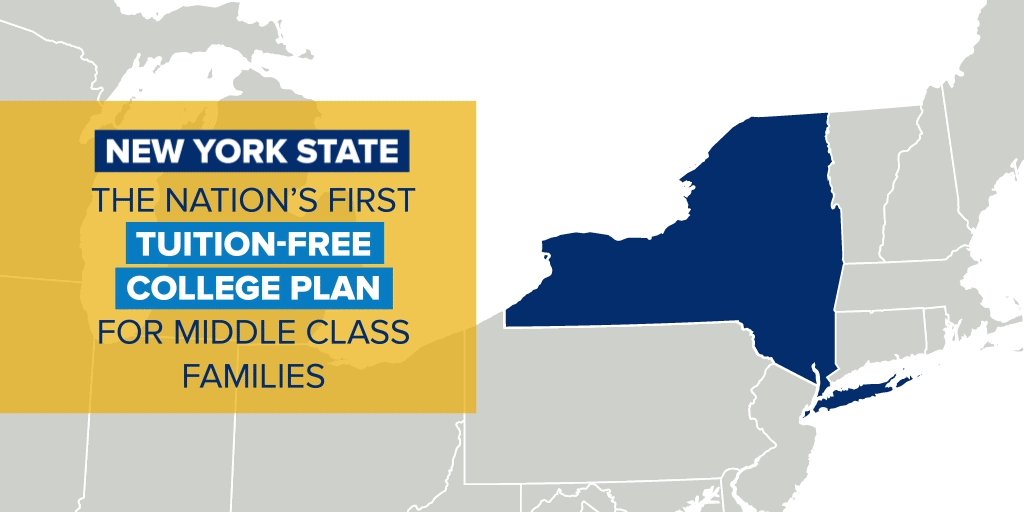 New Yorkers currently pay $4,370 for one year of community college and $6,470 for one year of college at all CUNY and SUNY schools. In order to help pay for the new initiative, the state and city university systems are likely to raise tuition for paying students by $200.

In order to receive the Excelsior Scholarship, students must be enrolled full time, maintain a passing grade point average and work in the state of New York for the amount of time that they attended college. There is no age limit and roughly 80 percent of New York state’s families would be eligible.

“Today, college is what high school was,” said Gov. Andrew Cuomo in a statement. “It should always be an option, even if you can’t afford it.”

But those looking to take advantage of tuition-free offerings in New York City shouldn’t forget that the city and surrounding metro area is one of the most expensive places to live in the U.S. — and the world.

According to the annual Worldwide Cost of Living survey, New York is currently the ninth most expensive city in the world . A GOBankingRates report estimates that you have to make at least $86,000 a year to live comfortably in the city.

Other parts of the state would provide a more manageable cost of living for college students.

If you want to go to college for free in California, the place to go is San Francisco. In February, the city became the first in the U.S. to make free college available to all residents, regardless of income.

The city approved a transfer tax on properties selling for more than $5 million to fund an education program that allows all city residents to attend the City College of San Francisco tuition-free. The tax would provide the college with nearly $5.4 million annually and would offer full-time low-income students $250 per semester.

In order to take advantage of these Californian perks, students need to have lived in the city of San Francisco for at least one year. Many have pointed out that San Francisco’s soaring cost of living makes it prohibitively expensive for many would-be residents. If you want to live comfortably in San Francisco, you’ll have to earn at least six figures.

Expansion of these initiatives could offer education opportunities for thousands of Americans. Free college was central to Sen. Bernie Sanders’ presidential campaign platform. He recently introduced the College for All Act with Rep. Pramila Jayapal, D-Wash.

The act, which is similar to the Excelsior Program, would “eliminate tuition and fees at four-year public colleges and universities for families making up to $125,000 – about 80 percent of the population – and make community college tuition- and fee-free for all.”